Ministry of Trade and Industry, Singapore confirmed the development. Trade Relations Minister-in-charge Iswaran said it is a closure and also admitted that the Singapore Consortium incurred a few million dollars loss. However, he said Singapore Companies remain interested in investing in Andhra Pradesh and other Indian states because of the size and potential of the market.

The previous AP government headed by Chandrababu Naidu had chosen the Singapore consortium of Ascendas-Singbridge and Sembcorp Development through the controversial Swiss Challenge method as the Master Developer of the project. But the current AP state government has cancelled it.

Naidu administration then had entered into a memorandum of understanding with the Singapore Consortium on May 15, 2017, for executing the project.  As per the agreement, Amaravati Start-Up Area Development Project was aimed at developing start-up area to provide necessary infrastructure in a 6.84 sq km area (1,691 acres) in three phases over 15 years. And the project was undertaken under the Public-Private Partnership mode by previous AP state government which was first.

According to the MoU, Amarvati Development Corporation (ADC) and Singapore Amaravati Investment Holdings Limited, which together constitute the Amaravati Development Partners (ADP), signed the Concession Agreement and development Agreement (CADA) and the Shareholders Agreement. The Singapore Consortium will have 52 percent and ADC will have 48 percent stake in ADP, which will take up development projects in 656 acres in the first phase in the five years. However, the project did not take off. A part of the allotted land for the start-up purpose was stuck in an ecological-legal tangle as 170 out of 1,691 acres were right on the river bed. 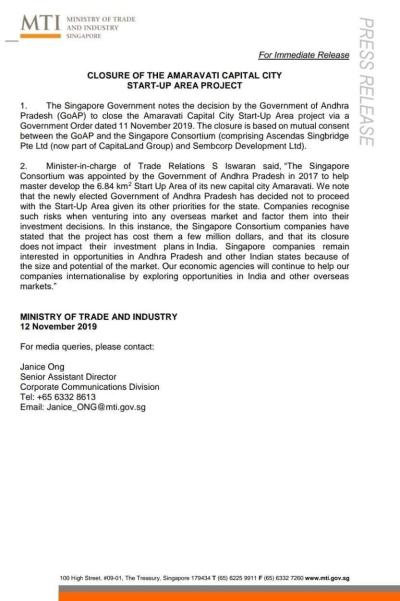