Final Report: Bheeshma is a decent entertainer with timely dose of comedy throughout. Director Venky kudumula chose a regular story but he shaped it well with execution and decent comedy.

Nithiin did exceptionally well in his role, he looked stylish and smart, while he did the fun part well too. Rashmika is usual and she has got nothing much to perform. Vennela kishore steals the show throughout the film with his one liners and timing, he is an asset here. Jishusen looks like any other white collar villain.

Songs were good and shot neatly. They were short enough to keep the story running. Background music is good. Mahati swara sagar did a decent job, mani sharma infleunce could be heard many a time.

The movie is made with high production values. All the scenes and frames look appealing.

Stay around to grab a look at full review of Bheeshma that will be live in few hours.

- Story takes off with Anantha Nag speech at bheeshma organics - Hero Nithiin's entry as frustrated single. A few comedy scenes are on now with Vennela Kishore.

- Its time for Singles Anthem

- A Small fight to impress heroine and followed by a song 'Sara sari...' 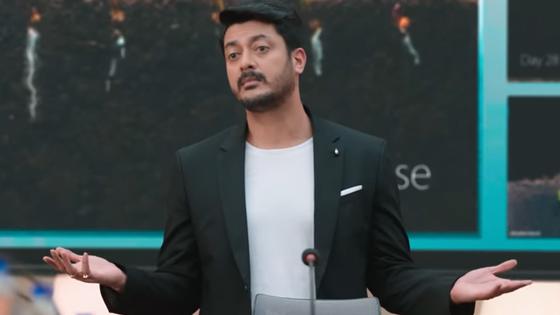 - Sampath Raj doing comedy, reminds some of them he did in Run Raja run

- A silly flashback between Deva (Sampath) and Bheeshma's dad (naresh).

- A stereotype elevation and focus for Bheeshma in a debate about farming.

- Some hilarious scenes after Bheeshma becomes the CEO..

- Frustrated Vennela kishore is hilarious with One liners and expressions - Vennela kishore continues his flow, Raghu Babu joins, both bringing the house down

- Songs are short and sweet, they are not really cutting the story flow

- Mahati swara Sagar background music is good in many scenes

- Rashmika looks hot in saree, She dominates nithiin in the song.

- Ajay enters as a cheif guest at Raghavan event, gives a turn to the show

- Interesting scenes on how Bheeshma turns the tables against Raghavan.. all characters come into plot

- Bheeshma know why he was chosen

- Funny scenes of Raghavan and his brother at rolling titles

Nithiin has not tasted big success recently and his last hit was A Aa four years back. Now he joined hands with Chalo director Venky Kudumula for Bheeshma.

The trailer hints of a regular commercial formula film and the main plot appeared to be a conflict between two seed companies with bits of comedy here and there.

With talented Jishnusen Gupta of Aswathama fame as antagonist, golden girl Rashmika as heroine and Mahati Swara Sagar giving two hit songs already, we have to see if Nithiin's Bheeshma would give him a much-needed success at this point.